After a 9 month closure, Ivar’s Acres of Clams on Elliott Bay opened it’s doors, appropriately enough, just before the 4th of July weekend.

Ivar’s is a Seattle institution. In 1938, Ivar Haglund opened an aquarium on the Seattle Waterfront. Ivar thought he’d try selling red clam chowder and fish and chips to the folks coming out to see the aquarium, and the rest is Seattle history. The restaurant and Ivar became well known to Seattleites over the years.  In 1964, the City of Seattle asked Ivar if he would put on a fireworks show over Elliott Bay. It was a huge request, but Ivar delivered the 4th of Jul-Ivar’s Fireworks Display every year until it ended in 2008.

Ivar ingratiated himself into the hearts of Seattleites through crazy stunts in his media campaigns. He staged octopus wrestling and clam eating contests. He wheeled his baby seal Patsy, in a baby buggy to see Santa at Frederick & Nelson. One of his crazier stunts was hanging a Ivar’s salmon sock from Seattle’s Smith Tower, a building once known as Seattle’s tallest building.  Just for fun, he ran for Seattle Port Commissioner and much to his surprise, he won. His catch phrase “Keep Clam” is more popular than ever today. 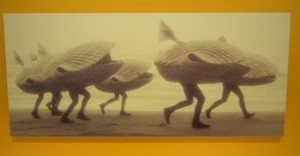 The construction of the Elliott Bay Seawall prompted the closure of Ivar’s and a number of other businesses. Ivar’s decided to take advantage of the down time and make some much needed updates. The kitchen doubled in size to employ more cooks during the summer season. The restaurant can now accommodate fish cutting for the fish bar inside, rather than outside on the back pier. They’ve added 200 new seats for outside dining and now have one big banquet room instead of two smaller ones. They also removed toxic creosote pillars at the pier and added steel ones to keep sea life healthy. And of course the flooring needed updating as well. It was 30 years old. Division 9 Flooring was thrilled to be a part of this renovation. There’s a lot of Seattle history on Pier 54. We’re honored to be able to leave our mark there as well. Keep clam and check out Ivar’s new flooring.