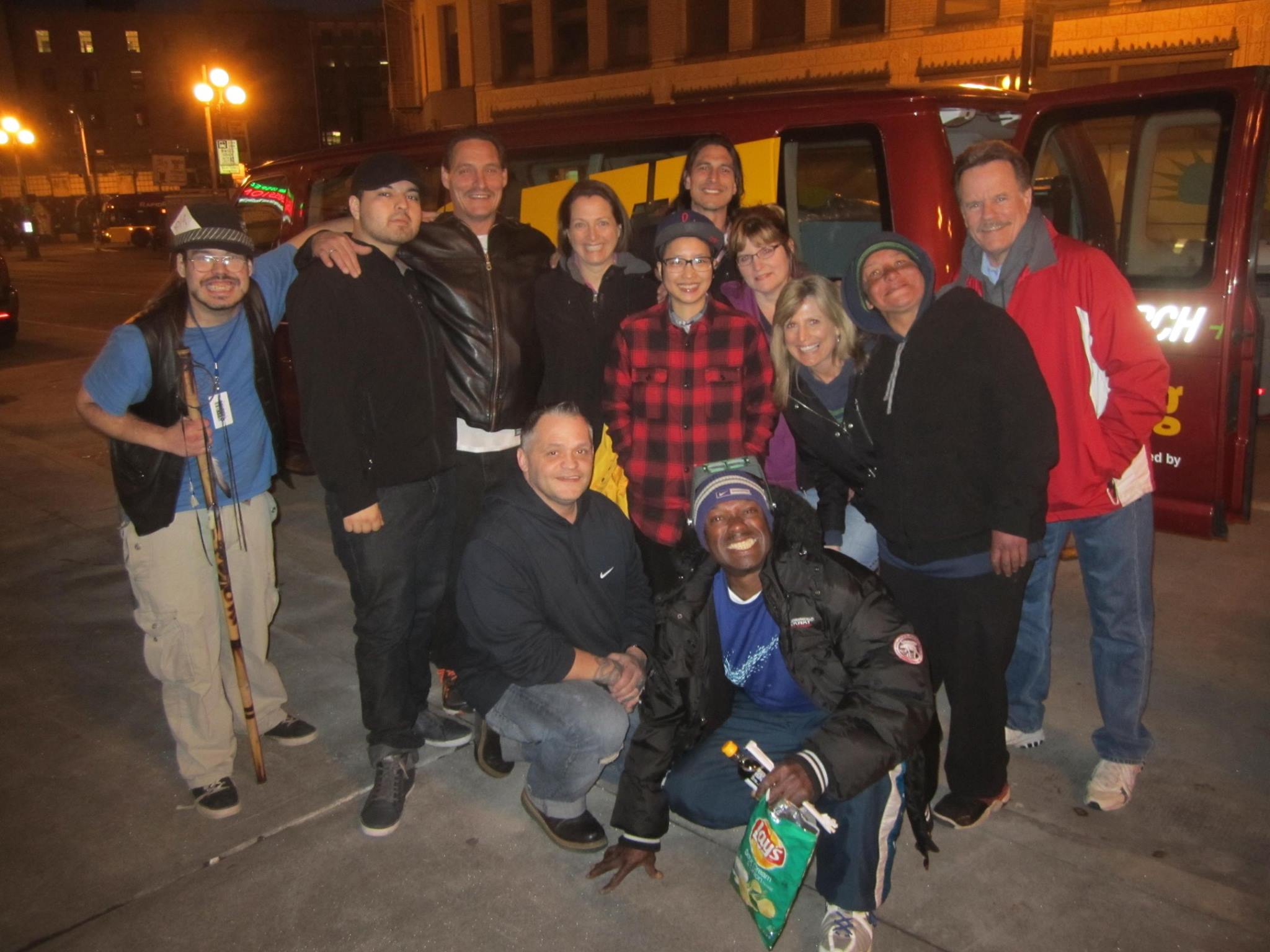 Division 9 received an invitation recently to go on a ride along with the Union Gospel Mission’s Search & Rescue. The UGM goes out nightly with blankets, clothes, food and cocoa for those living on the streets of Seattle. A few of us took them up on the invitation. Before we headed out, we were told that the most important thing we could do for the people were were about to meet, is just talk with them. We may be the only person who talks with them that day. We went out with Richard and Travis from the Mission. Travis says that these people “just want to be acknowledged as human beings”. We made several stops, mostly in the industrial area of downtown Seattle and near the stadiums. The vans go out nightly so some of these folks are familiar with the guys from the Mission. Others are a bit stand offish, but when they realize we’re only there to help or talk with them, they seem to warm up a bit. It was pretty cold the night we went out, but how can you complain when these people are sleeping in the cold? You can’t. We ran across a couple camping out in a tent on the sidewalk near Post Alley. One of them came to the van for hot cocoa while the other waited in the tent in a t-shirt. Another couple  was living out of a vehicle. We also met a gentleman named Frankie. He was a P.O.W. and unable to sleep indoors since the war. He sleeps on a loading dock with his 8 month old puppy named Joe Jack. He was worried that Joe Jack had something wrong with his eye. Some of the folks in our van pooled money together to cover the puppy’s vet appointment. Frankie was clean and sober, but most of the folks we met were not. There’s an open invitation for the homeless to spend the night at the Mission, but you must be sober to do so.  The mission hopes to recruit these folks and get them clean and sober. The guys driving us around, Richard and Travis, had both been homeless at one point. Richard had just graduated from the Mission’s Sobriety Program. Travis has been clean and sober and off the streets for 6 months now. The Seattle/King County Coalition on Homelessness says their latest survey showed there are close to 10,000 homeless people in King County. According to Travis from Union Gospel Mission, Seattle is known for being good to their homeless and it’s almost impossible to go hungry in our city. Union Gospel Mission serves 1500 meals a day, but there are several other options for the homeless as well. This was an incredible experience that left quite an impression. It’s clear these people are just like us. Life has knocked them down and they just need a little help getting back up. The Union Gospel Mission goes out nightly. If you’re interested donating or volunteering for the Union Gospel Mission, you can find information here – Union Gospel Mission.